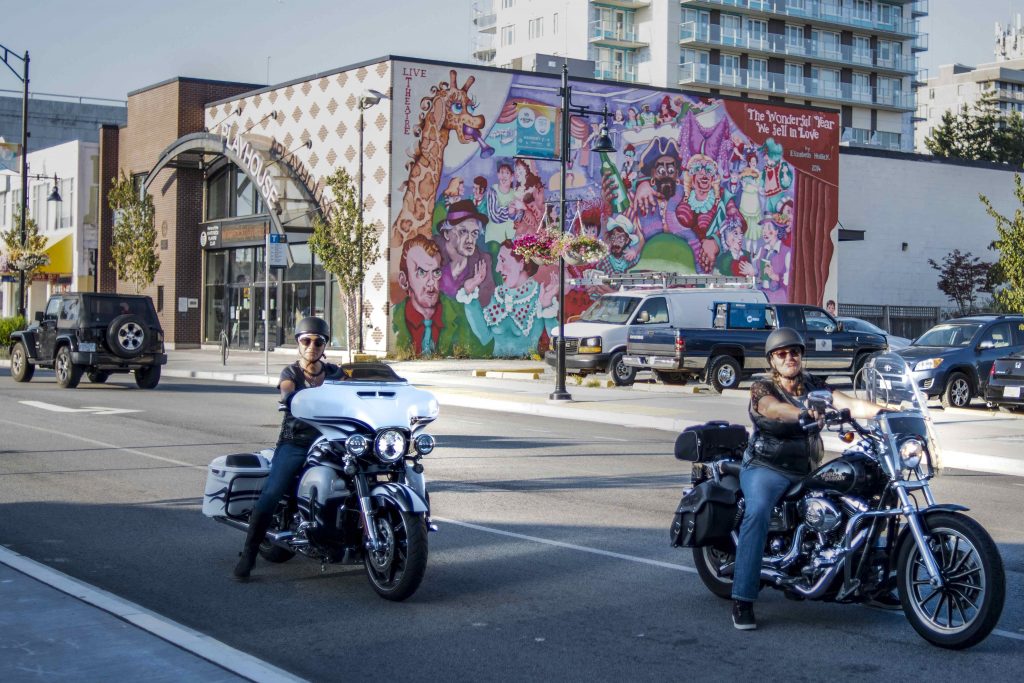 White Rock is home to a bustling arts scene! At any time of the year, visual and performing arts are always thriving in White Rock.

The outdoor art of White Rock is curated to spark joy, inspire hope, and celebrate our strength and resilience as a community through various significant events of our lives. Public artworks are everywhere: sculptures along Marine Drive and elsewhere; photographs on hydro boxes; or murals on the walls of buildings around town.

Take a virtual tour of our White Rock murals below. Better yet, spend a day exploring the city and take in as many public art pieces as you can find! Make sure you tag us in your photos on Instagram @WhiteRock_BIA!

The painted utility box along Marine Drive was done in 2012 by artists from 4Cats Art Studios. Each side of the building is decorated differently, inspired by the works of Monet, Van Gogh, and Norval Morrisseau.

Painted on the sidewall of Blue Frog Studios, the colourful Blue Frog mural, White Rock’s very own recording and production studio. It is a representation of the activities and events taking place inside the studio, extending to every corner of our seaside town, where art and creativity seep through various facets of our daily lives.

On the side of Uli’s restaurant on Marine Drive, this allegorical portrayal of “rugged old-growth trees” artfully treasures the West Coast forests of British Columbia.

Perhaps the most recognizable mural in town, this mural by artist Robert Wyland features the life-size image of a gray whale family alongside Pacific bottlenose dolphins. White Rock was the fourth of Wyland’s 79 city, one hundred paintings (final Whaling Wall in Beijing in 2008) campaign to raise awareness of aquatic habitats.

This mural, sponsored by the White Rock BIA, is an update of the famous White Rock beach photo.  It’s also an Instagram mural- be sure to pose, click a photo, and share on social media!

In support of the BC Lions Easter Seal Operation and the Canucks for Kids Fund, White Rock purchased the two spirit bears, which are painted by artist Elizabeth Hollick with brilliant Rock motifs to celebrate children’s’ health and wellness. Both bears stand 7 feet tall and are certainly community favourites!

It is the people who make White Rock the beautifully embracing town it is. Hollick’s whimsical depiction of different people and the places we arrive from embodies the diversity of our city by the sea.

The Wonderful Year We Fell in Love by Elizabeth Hollick

This eye-catching mural sits on the side of Coast Capital Playhouse and is an embodiment of the thriving art scenes — of various mediums — of White Rock. Specifically, this piece vividly pays homage to the characters from the annual pantomime of the White Rock Player’s Club!

Whenever you are in town, don’t forget to take a moment and savor all the murals and public arts White Rock has to offer! 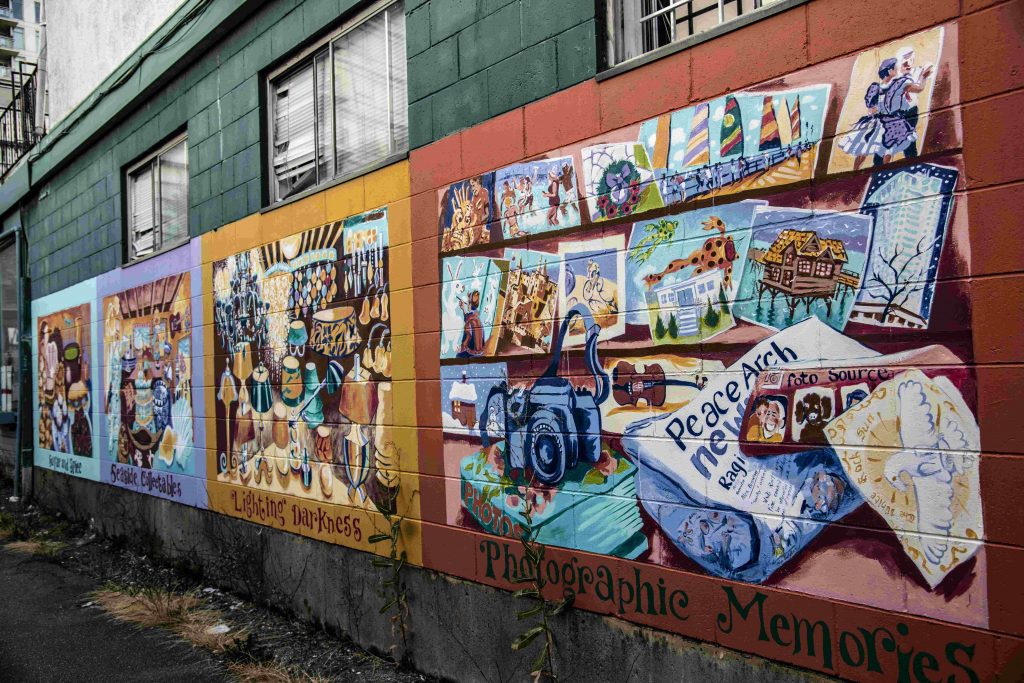